Sitting on my derrière twittering and playing scramble on facebook is a sure fire way to ensure that dinner hasn't even begun to be cooked by dinner time. Past 9 pm, husband hasn't been fed and the poor darling hasn't said a peep about it, it's time to dream up a meal which gets cooked up as well as tucked away in a snap.

Lately I've let out the goddess of concocting from within more often than not. And what I've realized is that the most scrumptious meals are the ones prepared in a jiffy huff huff.

I apologize in advance for the less than agreeable photography. But when I'm really hungry, I cannot offer more than a camera phone click and post. It doesn't help that the lighting theme in the house leans towards cozy/romantic rather than "spotlight! watch me while I eat!"

Basically what I'm trying to say is that the rice is not a jarring florescent like that picture portrays it to be. It's actually a rather pleasant shade of green. And the red and yellow bell peppers make the dish quite attractive. 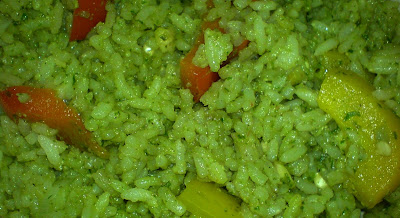 Seasonings (quantity of each according to preference):
Turmeric
Cinnamon
Pepper
Salt

Cook the rice in the microwave with 3 cups of water for 20 minutes.

Toss the white onion and the red and yellow capsicums with the olive oil and cook in the microwave (using the grill+micro mode if available) for 3-5 minutes till they are just done.

Mix the rice, veggies and seasoning ingredients together.

Grind the cilantro, spearmint, cashew and green cilli into a paste using a wee bit of water.

Pour over rice and mix. Done!

Re-heat in microwave for half a minute and serve hubby. Say "attractive to look at and yummy to eat". He'll nod happily at start chowing down :)

The End.
posted by Veganosaurus at 23:14