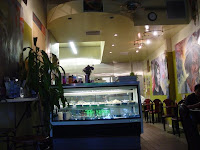 My friend from our Vegan Etsy team Roni of Daisywares was so sweet to drive all the way up from Berkley to San Jose just to meet me last week. We've interacted online for a while now but this was the first time we met in person and it was awesome! :) We first chatted over tea at the hotel waiting for my hubby to get back from work. Then the three of us drove to the Good Karma Vegan Café at downtown San Jose. 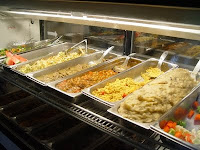 The first thing you notice when you walk in is the great spread at the counter and almost simultaneously see the large art by local artists displayed on the wall.

Good Karma is a very casual, chilled out, deli style restaurant. The guy at the counter is really friendly and courteous. You get to pick 1, 2 or 3 items (priced accordingly) and your choices are served on a plate with yummy brown rice and the house sauce. The food plate is heated in a microwave and then served to you. I decided to try the mashed potatoes, stuffed pepper and curried tofu. The mashed potatoes with the sauce was heavenly! The curried tofu had a slight overdose of spices but was tasty enough. The stuffed pepper was nice too but I preferred the pepper over the stuffing. For that price the portions were HUGE! We were all totally stuffed by the end of it! 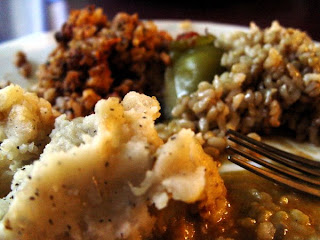 Good Karma is the kind of place that will just grow on you. I can imagine working or studying at the San Jose downtown area and then going to the Café everyday just to chill out with friends and eat the yummies. I could also see the guy who runs the place becoming good friends with the regulars. If you're in the Bay Area, this place is definitely worth one visit. 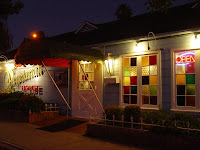 They had Vegan Baklavahs on their menu but unfortunately they'd run out of them :( So we decided to walk a bunch of blocks to Vegetarian House and grab some dessert. The walk really helped with the digestion but not enough to eat anything immediately. So we packed a couple of yummy cakes to have later.

By the time we got back to the room we were ready to have one of the cakes we got. The Vegan Cheesecake (which we ate the next day) was nice, not mind blowing or anything but the Vanilla Bean Cake which we had that night was simply amazing!! Soooo moist and flavorful!! One of the best cakes I've ever tasted! 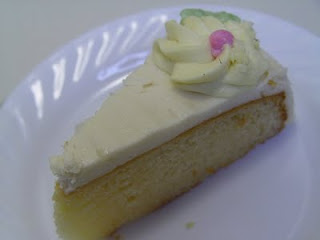 posted by Veganosaurus at 03:22