We had a long annular solar eclipse today. From start to finish it lasted for about 4 hours. Here in Bangalore, the eclipse started around quarter past 11 am and ended at a little past 3 pm. It hit its peak of approximately 84% at 1:23 pm.

Traditionally we believe that during an eclipse, the stomach should be completely empty. And after the eclipse is entirely done, we bathe and then cook something fresh to eat. Any previously cooked food that's been lying around during an eclipse is chucked away, never to meet a mouth or a tummy.

This practice stems from a mythological story about the Demon-God, Rahu, swallowing the Sun (or the Moon, depending on his mood), making any eclipse a very inauspicious period of time. Hmm so why doesn't the Sun (or the Moon) stay swallowed beyond a few hours, you ask? Well that's because Rahu is a severed head (his body being considered a whole other Demon-God, Ketu, the history of which I might narrate to you on another day) with a large gaping hole at the end of his neck, through which the chosen celestial body escapes.

The scientific explanation given to us is slightly simpler. Something to do with the rays of the sun and bacteria. Well whatever the reason, I believe that some traditions are meant to be followed. Even if it's simply because I've grown up with these practices as part of my culture. And by me following them, no one's getting harmed in any way.

So I had my breakfast a little before 9 am hoping that it would be digested (well most of it at least) by the time the eclipse started and peaked. Now normally, I go without eating for hours in the afternoon without even realizing it. But today of course, since I couldn't eat, that was pretty much all I did want to do!

I was fine for the first couple of hours. I even meditated a bit during the peak eclipse time and it felt awesome! Then at a little past 2 pm, the thought of chocolates floated into my head, immediately followed by a sudden craving for potatoes. One of my friends on Facebook had mentioned earlier that he ate masala dosa, crepes stuffed with a savory potato mixture, for breakfast. My oatmeal, though I had it with mom's scrumptious mixed veggie Sankranthi sambar from yesterday, had paled in comparison. So those potatoes from the dosa must've stayed somewhere at the back of my head all along and then suddenly popped out shouting, "look at me! look at me!" with all their might when my tummy awoke from its calm reverie at the word "chocolate".

You might agree that the thought of potatoes is a hard thing to get off the brain. Especially if every time you nearly shake it off, your tummy ominously rumbles it right back into place! I'd soon forgotten all about the chocolate and was holding on to one single image... delicious baked potatoes. I tried to distract myself for the remaining hour of the eclipse (thank goodness there was only an hour left!) by watching the latest episode of House MD. It was a mostly successful attempt... except for that one moment where I could've sworn that Eric Foreman's whole head morphed into a potato and said, "the phrase 'Who's Your Daddy?' comes to mind".

At 3:11 pm, I shot out of bed like hot coals had stung my rear end and zipped to the bathroom. In such a hurry was I to get done with that bath that I considered not conditioning my hair *gasp* but I overcame that temptation.

Then I ate a yelakki banana to soothe my tummy and finally got down to my cooking! :)

Et Voila! Here is the result... 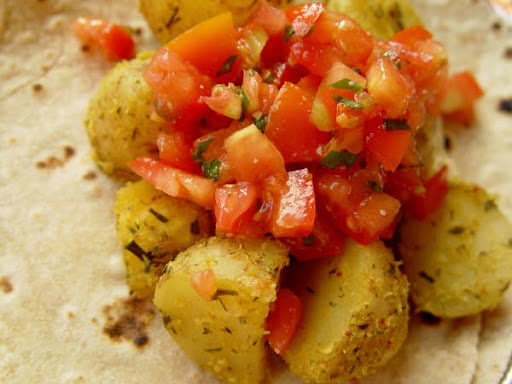 Whole wheat and flax chapatis, piled with herbed baked potatoes, topped with fresh tomato salad. I still can't believe I mustered up the will power to actually take pictures of the feast before wolfing it down!

Wash and scrub the potatoes along with the peel.

Boil water in a large pot and add a little sea salt.

Toss in the potatoes whole and boil for about 15 minutes.

Take the potatoes out with a slotted spoon, cut them in half and place in a microwave safe baking dish.

Add the rest of the ingredients (except nutritional yeast and lime juice) adjusting quantities according to your taste and toss until all the potatoes are coated.

Sprinkle on the nutritional yeast and lime juice and toss again.

Finally bake in the grill option for 5 more minutes.

(You could also just bake in a regular oven for about half an hour instead of using the microwave).

Taste to make sure that the top layer is slightly crunchy and the insides are soft and well cooked. Bake a little more if required.

Put everything into a bowl and mix with your hand, gently squeezing the tomatoes to merge the flavors together.

Enjoy with a satisfied smile! :) 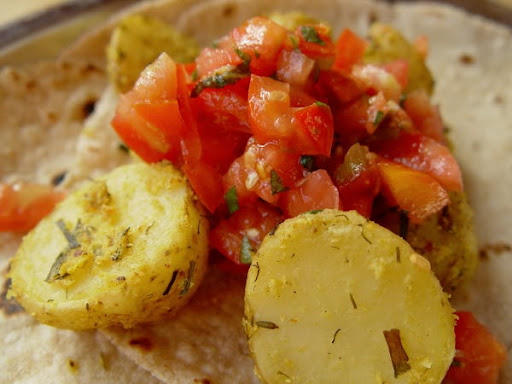 posted by Veganosaurus at 20:03