Before I post the recipe, I'd first like to say that as much as it might look like it, the bread doesn't have whole potatoes in it. The top just looks that way because it's just been shaped accordingly. *grin*

Normally, I prefer to use 100% whole wheat (or other whole grains) in my bread recipes. But this time, I gave in and used partly whole wheat flour with mainly white flour. The 100% whole wheat bread is delicious when there are inclusions in the dough like herbs and grated veggies to add interesting textures to the final product. But with plain, untextured breads, just whole wheat makes it too dense.

Well sometimes, I don't mind giving into taste over wholesomeness. Besides, this being a vegan bread, white flour is the only less-than-perfectly-healthy ingredient in there. So indulge away! :) 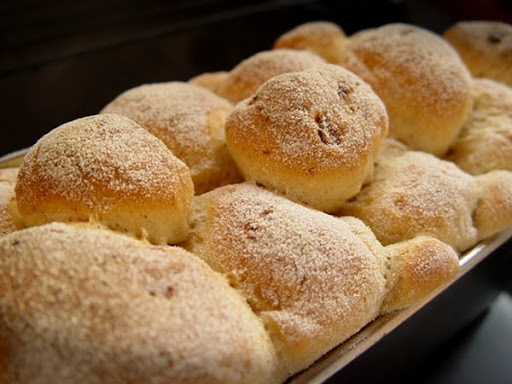 Mix the flours together and keep aside.

Combine the potato cooking liquid (should be slightly warmer than lukewarm), sugar and yeast and keep it aside for about 15 minutes. It should froth and bubble and rise a bit by the end of this time (very important).

Combine the soymilk and the apple cider vinegar and keep aside for a couple of minutes to allow the soymilk to curdle well. This acts as the buttermilk.

Now slowly add one cup of flour at a time and keep mixing until it forms into a stiff ball of dough.

Transfer to a floured surface and knead very well until it's smooth and elastic (very important).

Form into a ball and place it back into the mixing bowl. Cover it with a warm, wet cloth and keep it aside in a warm place or sunny spot for 1 1/2 hours to let it rise (it should at least double in size).

Punch down and again let it rise for 40 minutes.

Form the dough into 12 balls. Place 10 of these balls in two rows in a 9 X 5 inch loaf pan. Break the remaining 2 balls into 4-5 pieces, roll them into little balls and place them randomly on top any way you like.

Cover and let it rise until the dough has risen above the well over the rim of the pan (about 30-40 minutes).

Dust the dough lightly with flour and place the pan in the middle of the oven.

Once the oven goes off, leave the loaf in there for another 10 minutes and then remove immediately.

Let the bread cool in the pan for half an hour, remove from the pan, transfer it on to a cooling rack and let it cool completely before cutting with a serrated knife.

Tastes great served with a big bowl of soup or spicy bean chili. 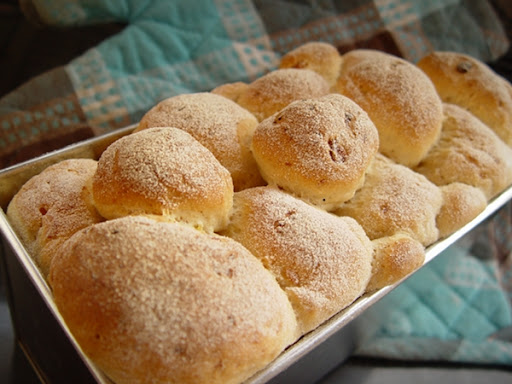 posted by Veganosaurus at 20:53