This Sunday was supposed to have been my very first vegan bake sale at a local fair called the Sunday Soul Sante. I kept putting off the registering because of sheer laziness and procrastination but then a fellow vegan who makes delicious cheezes out of nuts and tofu very kindly offered to split her stall with me. It was just the push I needed. But yesterday when I called her to confirm, she said that the Sante had been postponed because of the rains. The new date hasn't been fixed yet and it might be a couple of weeks at least before I know.

But in a way it's a good thing that it's not this weekend because now I can relax and prepare. Try a few new recipes, buy ingredients in bulk and get the packaging details organized. I know that cakes and cookies wrapped in cellophane with a little ribbon look adorable but I'm really looking for a more environmentally friendly option.

Since I was all agog with the idea of baking this week, I decided to go ahead and make something special yesterday. So I broke out my copy of Vegan Cupcakes Take Over The World. 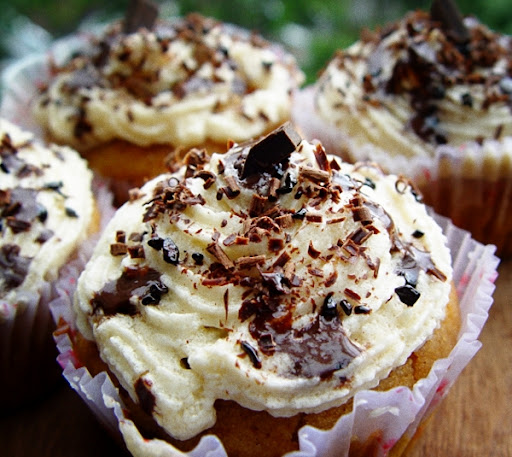 I bought this book over a year ago and have truly enjoyed reading it over and over again. The writing style is so amusing and the cupcake photos are TDF! However, I hadn't gotten around to baking anything from it because my older 12 cup nonstick pan doesn't fit into my current oven. But a few weeks ago I treated myself to a 9 cup pan (shiny aluminum, as recommended in the book) and had been really looking forward to taking it for a spin. And finally yesterday it happened. :) I decided to make the Simple Vanilla and Agave Nectar Cupcakes from page 44 of VCTOTW.

This is my first time baking cupcakes with a proper cupcake recipe. In the past I've just used plain yellow cake and brownie batter to make cupcakes. I must say that when using a proper cupcake recipe, the difference in texture is stark!! I was simply blown away by the sponginess and perfect crumb. I *finally* understand what the big deal is with cupcakes as compared to a slice of regular cake. LOL

Needless to say, my baking is going to involve only cupcakes for a while. 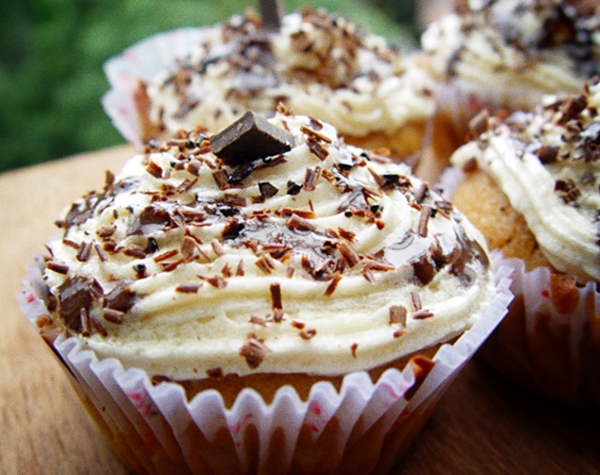 I frosted these cupcakes with Vegan Fluffy Buttercream Frosting from page 142. Thanks to a very generous friend of mine, I had some delicious vegan margarine from Australia in my fridge and I also had some non hydrogenated Earth Balance shortening remaining from last year's stock. So I used them and modified the recipe slightly by replacing the soymilk/creamer with cold espresso.

I sprinkled the frosting with dark chocolate shavings, instant coffee granules and drizzled on some liquified chocolate rum ganache. Finally I topped each cupcake with a dark chocolate chunk.

My very first cupcake decorating attempt and it was so much fun! :)

Something crazy happened too. I'd left the cupcake on the window sill and had stepped away for a moment but when I returned, the cupcake had disappeared. I checked the hidden camera and my jaw dropped as I watched the hijack!

posted by Veganosaurus at 17:47