Coconut Mylk Vegetable Stew is a hearty dish that hails from the state of Kerala, in South India. It is usually served as a combination with Appam Dosa, a kind of pancake made in a special, concave pan. The batter is poured into the hot pan, swirled around, drizzled with oil, covered and roasted for half a minute. This results in a soft, fluffy center and crispy sides. A piece of Appam, dipped in stew does all kinds of yummy things inside your mouth before melting away. :)

My mom usually makes Appam batter and gives it to me, so when I make the batter myself I'll share the recipe here on my blog. For now, here's a coconut mylk based veggie stew with an interesting twist and an added boost of health. 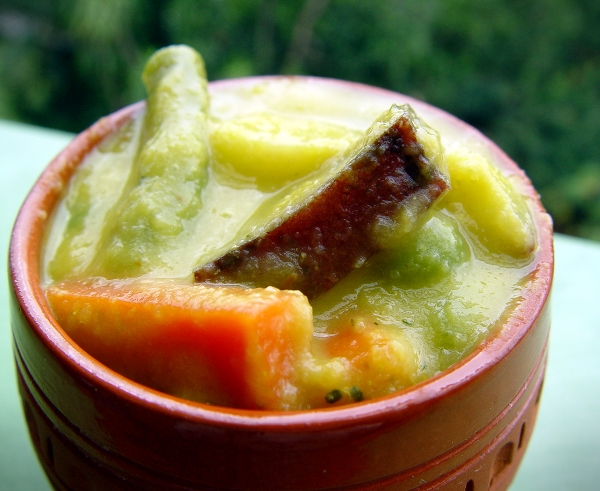 The veggies that are usually stewed in the coconut mylk are carrot, beans, peas and potatoes. But this time when I made the stew, I wanted to use up some week-old vegetables - a large slice of sweet pumpkin, a couple of half-dried radishes, one partially wilted chow chow (chayote) and a sweet potato that was in perfectly good condition. I diced the sweet potato with the carrots, beans and potatoes but the chow chow, radish and pumpkin, I decided to put into the sauce. It ended up making the stew extra creamy and absolutely delicious!

I liked it so much that from now on, whenever I make Coconut Mylk Stew for Appams, I'll be blending some cooked pumpkin into the sauce and maybe some radish too. :D

If you don't use a microwave, the vegetables can be steamed or boiled instead. It'll take a little longer and the texture will be slightly different, but other than that, I'm sure it'll taste just as yummy. :) 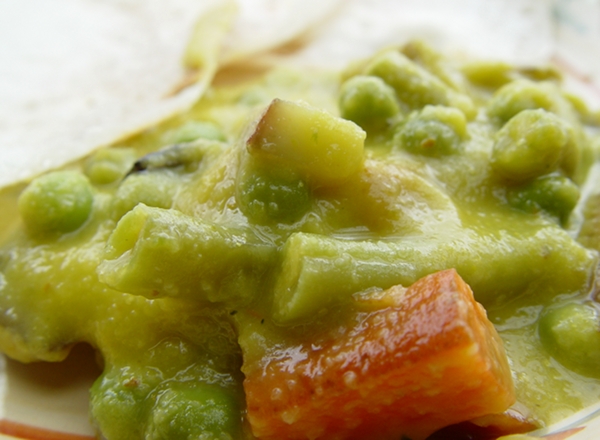 Scrub and wash all the vegetables well (do not peel them).
Cut the pumpkin, radish and chow chow into chunks and place them in a microwave safe dish.
Sprinkle some salt over them, add half a cup of water and nuke for about 10 minutes (until tender).
Transfer to a wide bowl or plate and keep aside to cool.

Meanwhile, slice the carrots, beans, potato and sweet potato into 1 inch pieces and place them in the micro dish, along with the frozen peas.
Sprinkle salt and water over them and nuke for 5-7 minutes (they should be cooked but crunchy).

Now blend the cooled pumpkin, chow chow and radish into a creamy sauce, adding the coconut cream/mylk and about a cup of water (a little at a time).

Heat the coconut oil in a heavy bottomed pan or wok.
Add the cinnamon, cloves and sliced green chillies and stir fry.
Add the vegetables and stir fry for a couple of minutes.
Add the prepared pumpkin-coconut sauce and mix well.
Bring the sauce to a boil, reduce the heat to medium-low and simmer for 5-10 minutes (to save time, I usually start making the Appams at this point, while the sauce is simmering).

Serve hot with Appams or Stemed Rice or Toasted Bread. 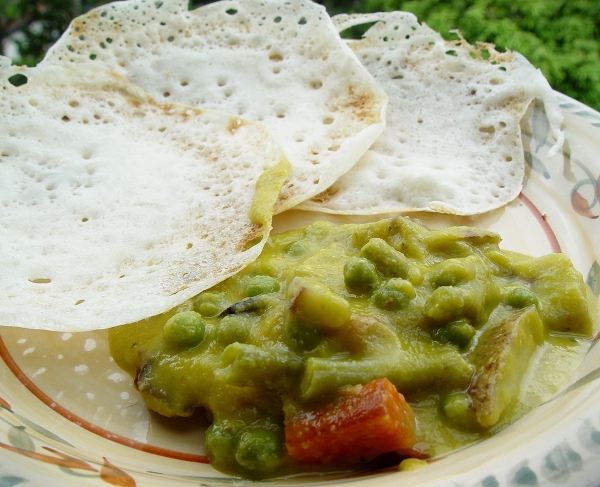 posted by Veganosaurus at 16:12