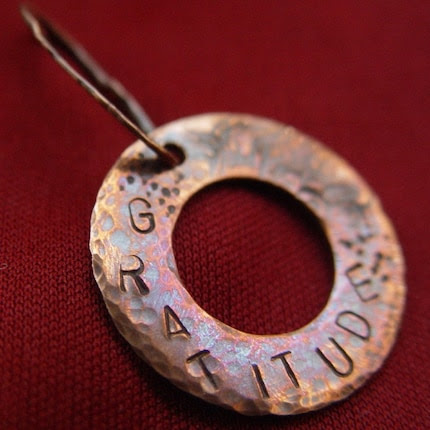 I've been featured in the December 2009 issue of the Jewelry Artist magazine in the article on page 50, titled Designer Social Networking. :) :) :)

It all started when I posted the tutorial on creating a Facebook Fan Page earlier in the year. When I created that tutorial, it was simply with an intention to make things easy for a couple of my friends and blog followers. Little did I know it would become so well known.

A few friends asked me if they could share the link to my blog post with their friends and then before I knew it, it went from one friend to another, until one fine day Danielle Mavel, better known in Etsy kingdom as the very cool daniellexo - Etsy's education coordinator, contacted me to ask if my tutorial could be posted in Etsy's awesome blog The Storque. Needless to say I was thrilled! If you're in the Etsy community, you'd know that being featured in any way on Ye Holy Storque is a *huge* deal. :)

Well anyways, months passed and it was heartwarming to read each and every comment and convo letting me know that the tutorial had helped people create their own page.

Then in August, Danielle contacted me again and told me that Annie from Jewelry Artist magazine wanted to interview me. So I got in touch with Annie and she told me about this article she was writing about Social Media for Designers. I was in the US at that time so it was easy to schedule a telephone interview. Annie was very pleasant to talk to and I really enjoyed telling her all about my use of Facebook and Twitter.

The article was to come out in October's issue but for some reason they decided to put it in December's issue instead. I was told that when an article is moved to the holiday issue, it's always a good thing. :)

Jewelry Artist mag also wanted to feature a couple of my jewelry pieces along with the article. Since I had just gotten into stamping at that time, my store was filled with stamped jewelry - particularly pendants. So they chose two of my pendants and I sent them pictures in the required resolution. 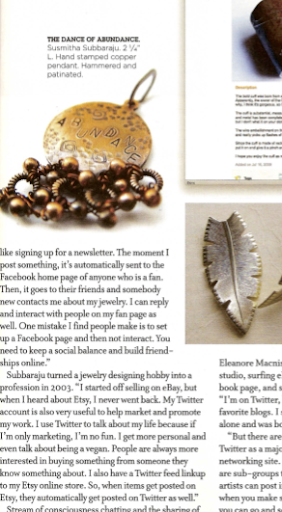 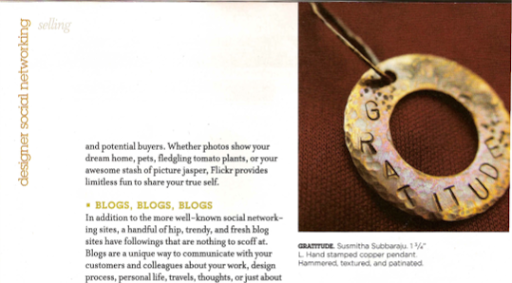 I'm now waiting for my copy of the magazine to get here by snail mail. Can't wait! :)
posted by Veganosaurus at 17:10