As I told you all in my first Vegan Mofo post, every month our local Vegan Bengaluru group holds a meet-up event. Usually it's a potluck but this time we're doing something different. On 29th October we've organized a special vegan buffet at In The Pink Organic Restaurant and Bazaar.

We've been in touch with the owners, Aparna and Paneesh and also Chef Joydeb to come up with a delicious menu. It's important to us that the spread be something special. There will be four salads, a couple of starters, a handful of main dishes and even a few desserts.

The buffet will cost Rs.250 per head and I can say that it's shaping into something that is well worth every paise!

On Friday Mr. Vegantastic, Mil Mil and I went to In The Pink for a tasting session. They had prepped four things for us out of which we picked three.

Here's a little sneak peek for you:

Since In The Pink is also participating in our World Go Vegan Week event next week, a vegan pizza was anyway going to be a default part of 29th's menu. Daiya or other vegan cheezes are not commercially available here in India but this pizza goes to show that you don't even need direct replacements. The delicious Grilled Vegetable and Basil topping was yummy in its own right! 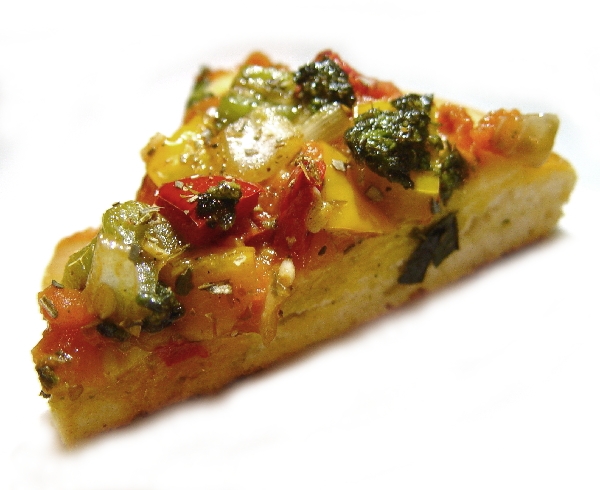 Yeah that wasn't my best food photo shot but it was past sunset by the time we got to eat the pizza and I had to make do with indoor lighting *shudders*. Considering that, it isn't such a bad picture. :oP

This next one is Chef Joydeb's own concoction. Strawberry and Lemongrass based dessert. A very new and interesting taste. It's definitely going to add variety to the menu. 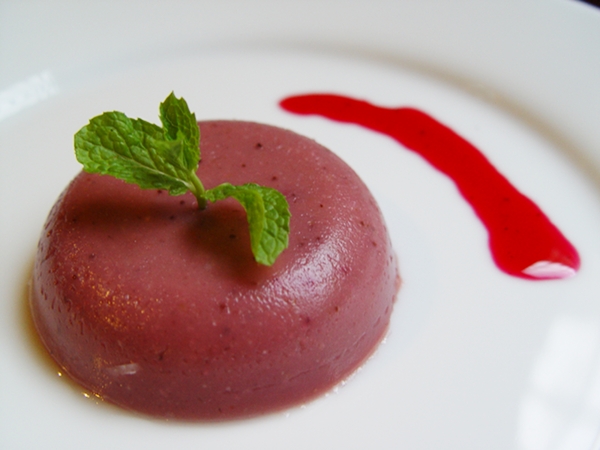 And finally the pièce de résistance... Pumpkin Whole Wheat Ravioli in a Spinach Béchamel Sauce. One word - GLORIOUS! I know it's usually the dessert which is worthy of such praise but OMG this ravioli was goooood!! I'm proud of myself for suggesting the recipe and giving pointers to Chef Joydeb on how to make it vegan. He himself was totally impressed by how awesome the vegan version turned out. LOL

Needless to say, this is the main thing I'll be stuffing my face with on the buffet day. :D 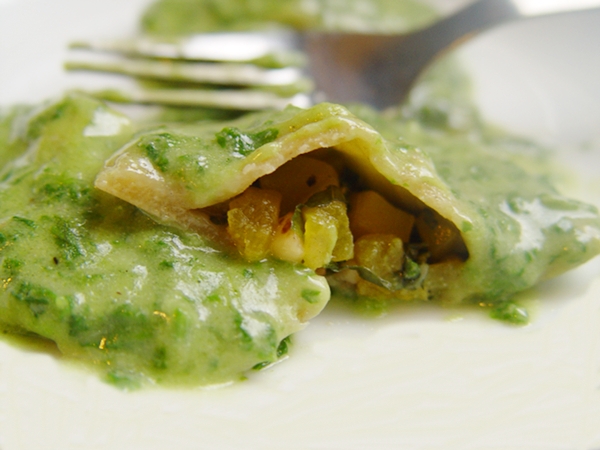 Earlier I said that we'd tasted four things and picked only three of them. The fourth was a pasta dish, Penne in a Creamy Basil Sauce. And the only reason we ditched it was because we figured since we had ravioli already, another pasta would be repetitive. But that doesn't mean that this dish was not super delicious. I already feel bad that it had to be left behind. The least I can do is make it famous on my blog. ;) 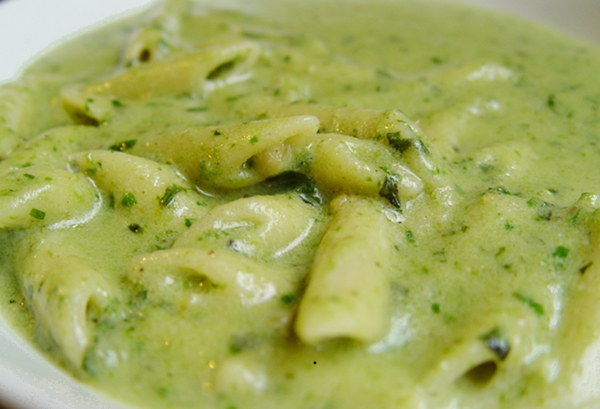 And because I'm addicted to claymation now, I'm ending even today's post with a romantic veganosaurus video featuring Cerlt The Evil and Witchy Poo.

posted by Veganosaurus at 23:32