The Kelvis Sandwich - Guest Post by Ann of An Unrefined Vegan


Today's guest post is by Annie of An Unrefined Vegan. I first discovered Ann's blog while browsing through the Virtual Vegan Potluck last May. Every participating blog had mentioned Ann as the brainchild behind the brilliant VVP idea. :)

When I visited her blog, I found these super yummy Sage & Rosemary Dinner Rolls with Roasted Garlic Coconut Butter and I decided that I would definitely be participating in the next VVP.

For the second VVP, the one for which I made the Hot Spiced Chai with Sesame-Cashew Mylk, Ann had this fantastic dessert on her blog - Maple Creme & Mocha Spice Cake Trifle with Fresh Blueberries. Just the name sounds sooooooo good, doesn't it? You should check out the pictures on her post!

Ann is also an active member of our Vegan Temptivists group and we've been visiting each other on the blogosphere often.

Today, Ann shares a delicious, hearty sandwich recipe with drool worthy pictures here on my blog. Thank you so much for guest blogging on Veganosaurus, Ann. :) 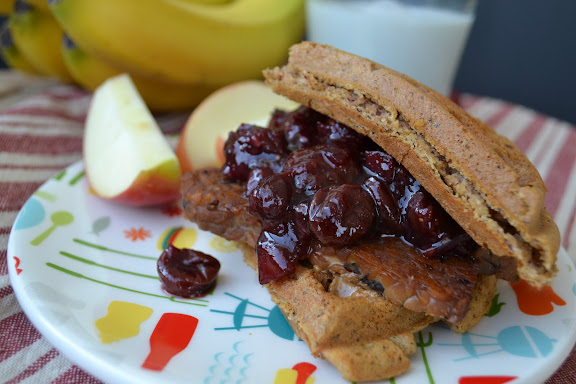 Born from Kel's frugal nature, this sandwich also takes some inspiration from the overindulgent appetite of The King himself, Elvis Presley, and his love of fried PB & banana sandwiches. You see, I was attempting to make a kind of bean-based bacon which consisted of white beans and various spices that I processed until smooth. After spreading the paste onto a baking sheet and baking for about 20 minutes I ended up with...a very hot bean paste. It didn't slice the way it was supposed to, but it did taste good. I let it sit abandoned in the pan for a few hours - fully intending to toss the whole mess into the garbage can. Instead, Kel squirreled it away in the refrigerator and the next morning I caught him crumbling the bean "bacon" onto his morning toast along with almond butter. He declared it a winner and when I reluctantly tasted it, I agreed. Thusly, the Kelvis was born.

Instead of the paste-like bean bacon, I went with my sure-fire tempeh bacon recipe and for bread - I wanted something special - so I whipped up a batch of maple whole wheat waffles. (Feel free to use a good, hearty bread instead.) A cherry compote sounded more interesting to me than The King's preferred fruit. This is one decadent, filling sandwich and would be perfect for Sunday brunch.

Thank you, Susmitha, for giving me the opportunity to share a recipe on Veganosaurus!

Almond butter (quantity is up to you)

In a large bowl, combine the flours, baking powder and baking soda. In a smaller bowl, whisk together the wet ingredients. Combine with the flour mixture and stir to break down any lumps. Allow to sit for about 15 minutes.

Lightly spray waffle iron with oil and ladle on some of the waffle batter. Cook 4-5 minutes (or per your waffle iron's quirks) and gently remove the waffle. Proceed with remaining batter.

If assembling the Kelvises right away, keep the waffles warm in a 200F oven while you bake the rest of the batter. Otherwise, place the waffles on a cooling rack. 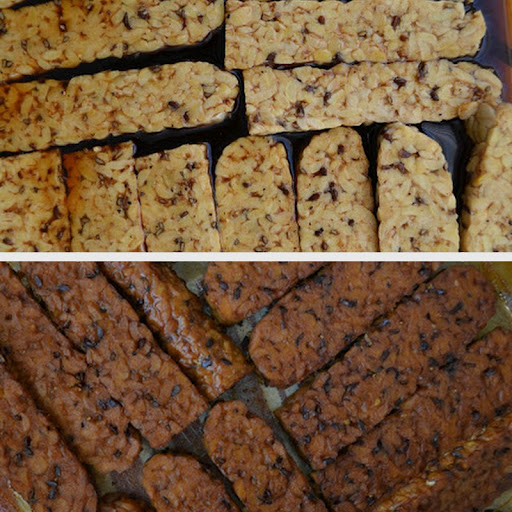 Make the tempeh bacon:
Preheat oven to 425F. Combine the tamari through black pepper in a 9"x9" baking dish (I use glass for ease of cleaning). Lay in the tempeh strips and turn once to coat.

Bake for about 20-25 minutes, turning once halfway through. You're aiming for a dark brown, slightly shiny exterior on the strips, with nearly all of the marinade baked off. Remove from the oven and set aside. 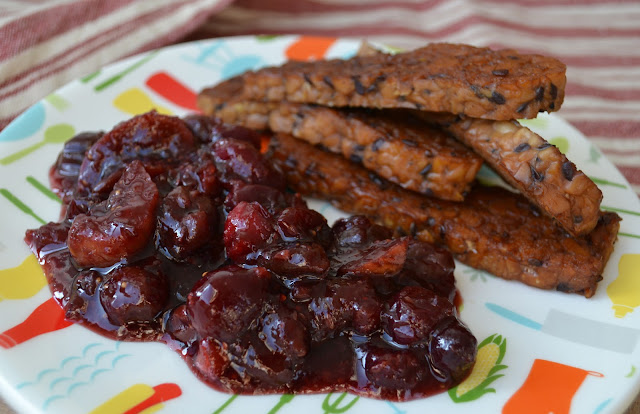 Make the cherry compote:
In a large saucepan, combine all of the ingredients through the allspice. Bring to a boil, then lower the heat to a simmer and cook for about 10 minutes. Stir in the cherry jam and cook for an additional minute or two to allow the jam to melt into the compote. Remove from the heat and stir in the flaxseed meal, if using. Set aside. Keep the compote in the refrigerator until ready to use - warm gently before serving with the Kelvis.

Assemble the Kelvis:
Slather almond butter on one half of a waffle; lay on some tempeh bacon strips and top with cherry compote. Top with the remaining waffle half, if desired.

A few slices of banana couldn't hurt. It's what The King would do.

If reheating the waffles, toast them so they retain their crunch, but serve as an open-faced sandwich so that the roof of your mouth isn't shredded by the crispy waffle.

posted by Veganosaurus at 20:00